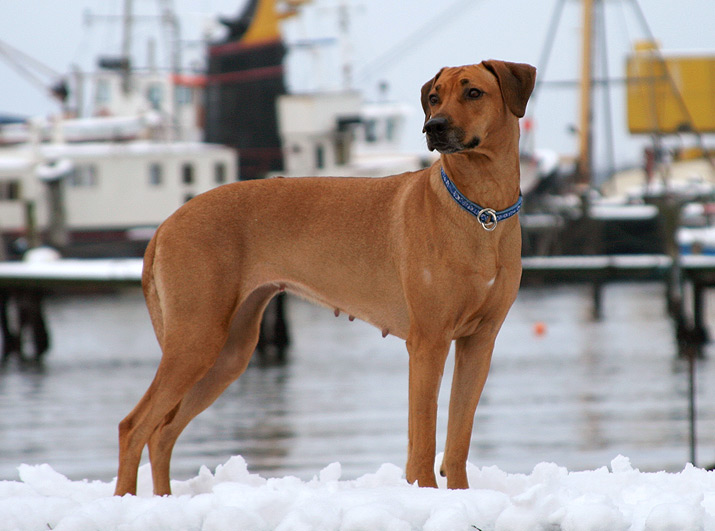 Perla, our sunshine, came all the way from Australia. A four month old little girl jumped off a transport-box and hugged me as tight as she could, as if she had never gone through a 24h interlanding flight       and a few hours costum-duty papering on the Amsterdam airport. She scratched and licked me all over. It was simply love at first sight. Then we spent another two days crossing Europe while little Perla was being a perfect guest both in restaurants and hotels. Perla learnt lots of interesting things staying with Paula – her breeder: Biting cables, sleeping in bed, chasing kangaroos, dive….According to Paula, she´s allways been an inventive young lady, but at the same time the most obedient of the litter.
Little Pearl grew up into a young pretty lady with a pleasant character. Being incredibly cuddly makes her a real women – however allways ready to go for any naughty trick. On the other hand she is rich in deliberation, receptivness and calmness. She loves gallopping in the fields changing directions over and over, swimming in the lake, romping in the snow…..and above all she loves people, dogs, horses, goats, rabbits…. She doesn´t bite cables any more, doesn´t chase kangaroos, but there is still one bad habbit she hasn´t got rid off – sharing bed with us 🙂

Perla left us in her 12 years after a stroke. We will miss her. Not a day goes by that we do not mention it to her. She is the founder of our breeding. Piece from her is still alive and will live forever in our home and each other and other the children from TUSANI … forever. In 2018 was released the second edition of my 2nd edition of my book about ridgebacks, which I dedicated to her memory.

Perla was awarded with title

Perla was awarded BISS by South African breed specialist Mr. Richard van Aken (Cartouche kennel) at the Czech Specialty Show 2003. There was a breed entry of 140!!!